On the brink of Global Recession

By RecessionALERT on October 31, 2012 in Reflections 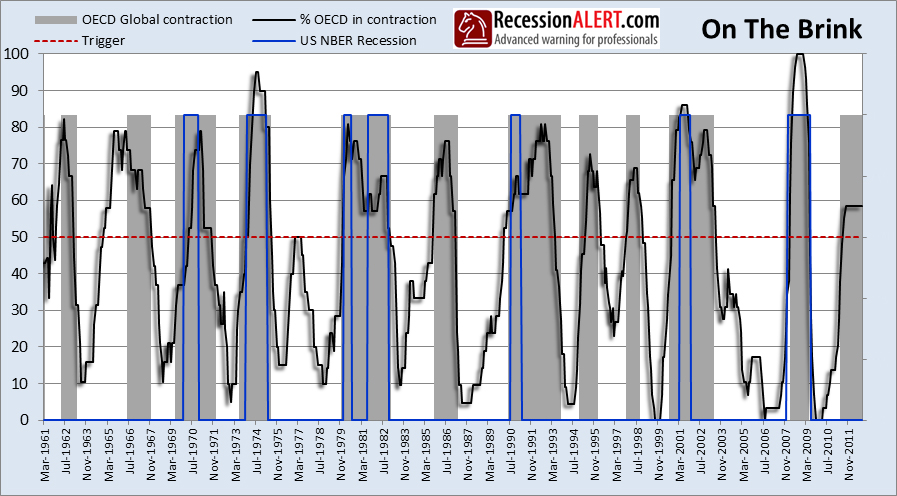 The blue lines show  NBER recessions for the U.S and we see that whilst every U.S recession occurred during an OECD-defined global recession, the converse is not always true. So whilst global recession is certainly an alarm bell for the U.S economy, it is just that – a shot across the bows and not a direct hit. This is therefore not a reason to hit any panic buttons but a warning to monitor the US recession models ever more closely for any signs of weakness. The U.S seems to be plodding along despite woes outside her borders. Certainly, her exports and foreign earnings are taking a hit but she is by no means down and out and for now at least, not in recession.

The question that comes to mind is if the world economies are plunging, muddling along or making soft landings. We need to take the above chart in that context. If 58% of countries are in recession and world economies are on steep downward trajectories then we have cause for concern as the odds of the U.S avoiding contagion will be slim indeed. To find out how the world economies are doing, we took import/export trade data from 85 countries around the world (to calculate extent of world trade volume) and coupled this with industrial output to come up with a global 2-factor “economic growth index” shown below. The data is obtained from the CPB world trade database containing foreign trade value series of 23 OECD countries  and around 60 emerging economies. Those 60 emerging economies cover approximately 90% of foreign trade of all emerging economies. With the almost 85 countries in the database, coverage of total world trade value is around 97%. 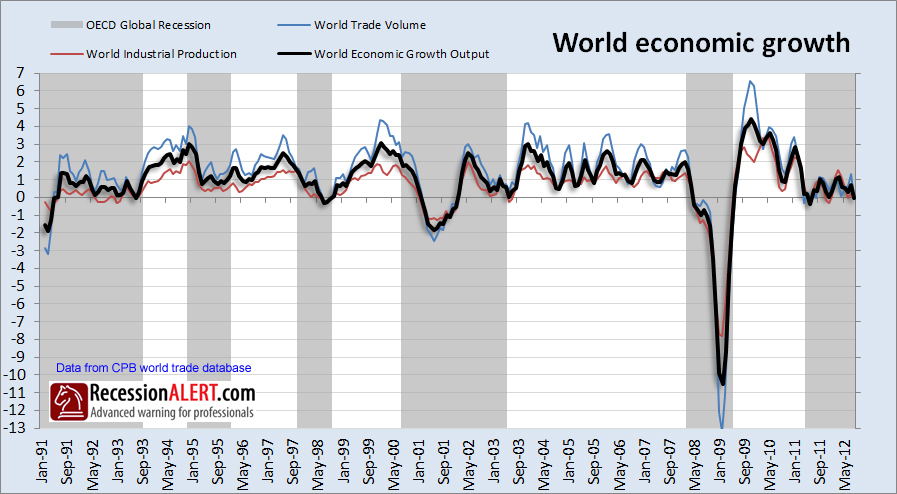 This growth series is obviously weighted according to size of countries exports/imports (for trade volume)  and size of industrial base (for production) and therefore is less synchronized with the OECD global recession periods than the % of countries in recession (which acts more like a diffusion index). It is however telling us that some large countries (like the U.S and China) are propping up the world economy output despite a high percentage of OECD countries in recession. Furthermore it is useful in that it shows economic growth “bouncing along a bottom” rather than plunging precariously over a cliff. In fact, the world output growth currently looks very similar to the US Coincident Economic growth model taken from our “NBER Recession Model of last resort”

The conclusion is that the world economies are in a precarious state but many are making soft landings and the % of countries in recession seems to have peaked. There is cause for concern for contagion to the U.S which means we must watch world economy status and the U.S recession models from our Recession Forecast Ensemble even closer for faintest signs of weakness. A fall into recession in the U.S is likely to be a very rapid one if it occurs against the current world backdrop. Getting out the stock market too soon can be very costly, as has been the case over the last 13 months since ECRI’s first recession call. For this reason we are not hitting any panic buttons on our side just yet.