SP500 was ahead of itself but tailwinds could be back

By RecessionALERT on November 2, 2018 in Reflections

During the 6 months running from March to September 2018, the SP500 was running counter to the seasonal average returns profile of the 4-year U.S Presidential Cycle: 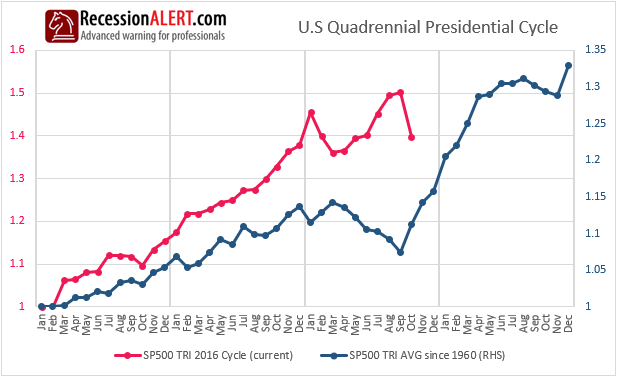 It appears the seasonality averages eventually got their way and the SP500 fell hard in October 2018, in what was supposed to be a strong month. In all likelyhood the tailwinds of one of the strongest periods in the Presidential Cycle will come to bear and we should expect good returns for the next 8-10 months.

Below is a slightly outdated (as of 2016), but no less relevant, statistical analysis of the Presidential Cycle. We have just entered the 2nd month of the “PowerZone” which is the 11th month of the Mid-term year. 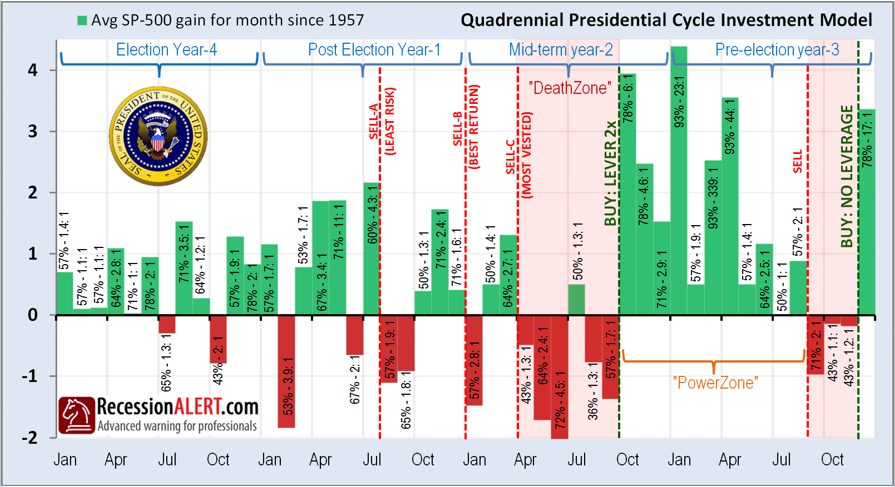 The height of the bars represent the average gain for the month, and the percentages within the bars represent how many of the months posted gains, followed by the gain/loss ratio. So for November 2018, the 2nd month of the “PowerZone”, we expect an average return of 2.5% with a 78% probability of a positive gain this month. The gains from the winning months in the 2nd month of the “PowerZone” outpace the losses 4.6 times to 1.

January 2019 promises to be the most powerful month of the entire 4 year cycle, with greater than 4% gains and a heady 93% winning percentage. The model suggests a dose of leverage between now and August 2019, although I prefer to scale back any leverage beyond April 2019.

The historical returns from the above suggested strategy of buying on 2X leverage from the 10th Month of the Mid-term year, selling in the 8th month of the pre-election year, and buying again with no leverage in the final month of the pre-election year and then selling again at points “SELL-A” (best winning ratio), “SELL-B” (best return) and “SELL-C” (most in the market) are simply astounding. In fact, I am not even going to bother putting them up for display lest your glasses become too rose-tinted.

Dwaine has a Bachelor of Science (BSc Hons) university degree majoring in computer science, math & statistics and is a full-time trader and investor. His passion for numbers and keen research & analytic ability has helped grow RecessionALERT into a company used by hundreds of hedge funds, brokerage firms and financial advisers around the world.
View all posts by RecessionALERT →
← Yield curve inversion & recession forecast
2nd derivative of WLEI posts warning →