Global Slowdown – Does it affect the U.S?

By RecessionALERT on May 6, 2015 in Research Papers

There is no question that the Global Economy is languishing. Now, with weakness in US economic data starting to filter through, the big question that arises is if the U.S will be dragged down by the global economy. The U.S is a very insular economy and whilst there can be no doubt that global economic slowdowns do have an effect on the U.S economy, we show that the correlation between global recessions and U.S recessions is surprisingly low.

EXHIBIT-B : Global Leading Economic Index versus U.S Recession
The chart below shows the Leading Economic Index of all OECD and non-member countries (amplitude adjusted) or the GLEI for short. The GLEI is somewhat flat at present, representing lacklustre future global growth. Whilst peaks in the GLEI forewarn nicely of global recession, they are far less useful for providing any information on future U.S recessions:

EXHIBIT-C : Global Leading Economic Index diffusion versus U.S Recession
The chart below taken from our regular monthly Global Economic Report, shows percentage of OECD and non-member countries with LEI growths below zero. Whilst this signal provides a useful signal for Global Recession it is less useful at providing anything useful about U.S recessions: 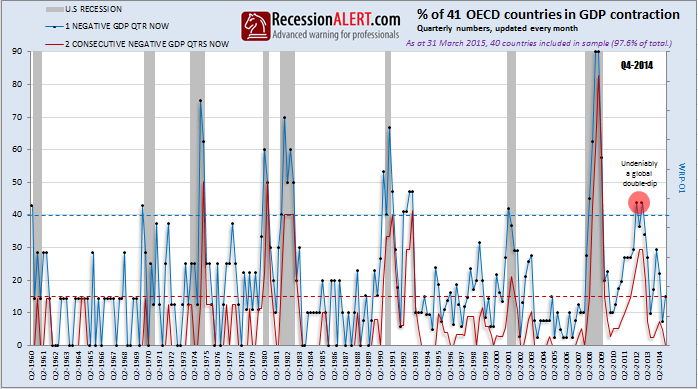 EXHIBIT-E : Global World Trade versus U.S Recession
The chart below, taken from our regular monthly Global Economic Report, tracks World Trade Volume which is defined as the average of imports and exports taken from CPB World Trade Database to give an idea of broad economic activity. Data is updated monthly from international trade statistics as opposed to national accounts data and contains foreign trade value series of 23 OECD countries and 60 emerging economies, giving coverage of total world trade value at around 97%.  Whilst we only have accurate data since 1992, we see that for the last two recessions at least, negative growth of this index does indeed provide some useful information for U.S recession. It is interesting to note that as of February 2015, global world trade appears to be in recession: 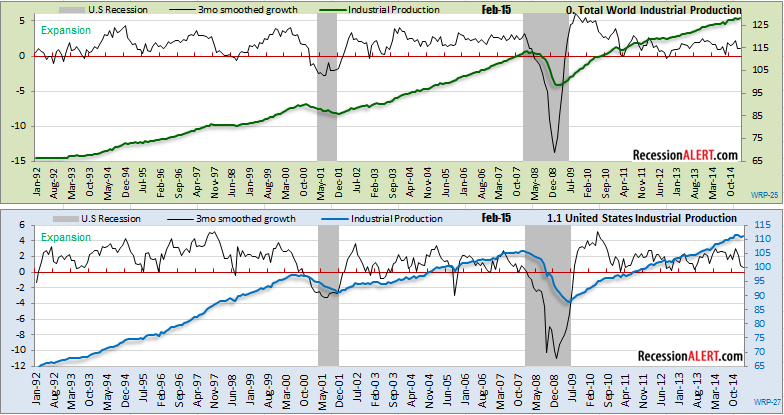 Conclusion
Historically, there is little correlation between Global Recessions and U.S recessions, except in that when the U.S is in contraction, so is the rest of the world. However certain metrics on the global economy do provide some useful input into U.S economic determinations.

You can download a recent March 2022 sample of our Global Economic Report below:

← Things that go bump in the night
Yellen Labor Dashboard reaches target →
IMPORTANT DISCLAIMERS: Although many of our models rely heavily on back-testing, optimisation and probability methods, please note that past performance is NO GUARANTEE for future returns. No system devised by man can predict the future, let alone the future of the markets and economies. What we have are sets of mathematical models that use historical data and varying theories to pinpoint places in time when the STATISTICAL LIKELYHOOD of calling the start and end to recessions is the greatest. In the midst of all the best mathematical models, you can have geo-political events, wars, terrorist attacks, natural disasters and even nuclear accidents that tip everything upside down. This is always a risk factor you need to factor in on any recession call no matter how confident you are in a signal. The SuperIndexes are created through mathematical and statistical optimisation techniques that best fit the historical NBER data. There is no guarantee that out-of-sample performance will match that of prior in-sample performance.