By RecessionALERT on March 12, 2020 in Reflections

Further to our March 5th 2020 warning on a looming Coronavirus (COVID19)  global pandemic, the WHO has finally recognized as such and declared the outbreak an official global pandemic. It is not hard to see why, when one looks at the chart below:

Whilst China has managed to stabilize new infections (assuming their numbers are to be trusted) the rest of the world does not have the luxury of their socialist command-and-control government, hospital building productivity, general mobilization, hive-mind population and draconian quarantine ability. And it shows with the infections spreading to over 125 countries at an exponential rate and more worryingly, rising mortality rates and falling recovery percentages. Within the next 3 days China is likely to represent under 50% of total cases. And remember, these charts just depict reported, confirmed cases – who knows how many are either under-reported or even unreported (as they are not known).

Governments are waking up a bit late but catching up fast with wide-sweeping quarantine measures announced on the hour across the globe. Schools and universities are being shut down, entire states and even continents are banning travel among one another, major sporting events are being cancelled, religious gatherings and general public gatherings are being banned, courthouses, theaters, cinemas, gyms, children playgrounds and nightclubs being shuttered by governments and large (even global) companies closing doors and asking staff to self quarantine and work from home.

Since this outbreak is likely to be with us for several months, potentially even forever (as with influenza) we can say without a shadow of a doubt that this outbreak is a once in 100 year event and our (out-sized) social reaction to its spread is likely to have a profound effect on the way we live and interact with the environment and each other – at least in the short term until we know more about it and/or a vaccine is found. It is also going to have a profound (but short-lived we believe) effect on every single economy of significance on the planet.

Despite the huge policy/media impact this virus is having across the globe, it is still in the little leagues when compared to other diseases humans have become used to living with. The (incomplete) list below shows the worlds’ deadliest diseases, sorted by their mortality (death) rates and also showing the number of estimated global deaths: 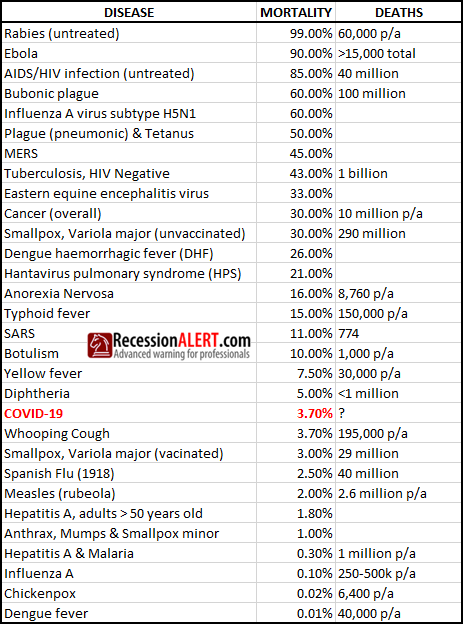 How does a disease with “only” 135,000 infections, relatively slow infection rate and less than 5,000 deaths illicit such an earnest response from us humans, given its lowly stature in the above list? Most likely its due to its newness (its what we don’t know about it that’s scary), lack of a known vaccine, its rapid spread compared to the more recent Ebola/SARS/MERS scares, its relatively high mortality rate and of course the prevalence of online and social media giving daily blow-by-blow accounts of the spread of the disease. Also, deep down, many people realize that this virus could be with us for a long time, just like the common flu which has been around for 2,000 years, and knowing how common and easy it is to catch flu, the fear of the unknown aspects of the disease coupled with the stigma of catching it and the uncomfortable mortality rates, are enough to send anyone heading for the hills.

If we look comparatively at the flu and Covid19 statistics, one cannot help but wonder if the current market reaction is overdone. In fact our policy and sociological responses to Covid19 are likely to cause more economic damage than the virus itself.

There are no leading economic indicators for these “black swan” events, but you can be assured it will have out-sized effects on most, if not all, our leading economic indicators, US and global alike. Whilst some US recessions are triggered by weak leading and co-incident economic data, there are a fair share of US recessions caused by an exogenous event such as this pandemic, when accompanied by US economic data that is weak and vulnerable or when valuations are stretched to the extreme – exactly the position we are in now.

For this reason, it is quite feasible that the U.S recession probabilities currently painted by any macroeconomic models (our most pessimistic, apart from the RAVI model, being 35-50% odds) could be shy of the realities of the exogenous event currently being played out. As most of the models are a snapshot of December 2019, with some January 2020 and the Coronavirus only catching the attention of the world late January 2020, we will only now begin to start seeing the probabilities catching up with the reality.

Apart from the RAVI Valuation model which was warning of extreme market risk and negative future equity returns as early as 2Q19, we are currently witnessing reactions in two other indicators.

1. The Weekly Leading Index (with the SuperIndex likely to follow suit in ensuing weeks)

2. The Composite Market Health Index (CMHI) – which has just dropped recommended exposure from 100 to 67%, as a result of the number of long term falling trends in SP500 now exceeding long term rising trends. New annual lows average is also set to overtake new annual highs average in the next few days which will signal a further 33% reduction in long term exposure:

Also note the upcoming Weekly CMHI is likely to make a print below 0.3, which also serves as a market warning, as per this research note.

Having said all that, the stock market correction is now at extreme levels (SP500 trough probability model > 95%, Great Trough (GTR) model, Selling Pressure Diffusion (SPD) model and the Zweig Breadth Thrust (ZBT) model) and out-sized reaction rallies are highly probable from current levels shortly. The speculators can take advantage of these when the signals come or the longer-term folk who subscribe to the thesis that all things economical are going to get worse from here can sell into the rallies. There is going to be a lot of selling into the rallies by speculators caught flat-footed in this steep decline (dare we call it a crash?), and traditional buy-the-dip strategies may therefore no longer be fit for purpose.

Dwaine has a Bachelor of Science (BSc Hons) university degree majoring in computer science, math & statistics and is a full-time trader and investor. His passion for numbers and keen research & analytic ability has helped grow RecessionALERT into a company used by hundreds of hedge funds, brokerage firms and financial advisers around the world.
View all posts by RecessionALERT →
← COVID-19 starting to look like a global pandemic
COVID19 Recession Warning →